Who should be the next Executive Director of UNEP?

Who should be the next Executive Director of UNEP?

by Felix Dodds from his blog (September 2013)
We are in the last nine months, I think, of the second term of Achim Steiner as Executive Director of UNEP. I believe, that he can feel, he leaves the post having substantively strengthened UNEP through the recent Rio+20 process.This included UNEP becoming a universal membership body and securing more robust funding including an increase in core funding from the UN budget itself.
I haven’t always agreed with his approach to his Medium Term Strategies. I’m not a great fan of matrix management it can/did fudge decision making within UNEP  as it is organized in Departments and then had six thematic areas added. This meant that departments and themes were competing for funds.   As Nigel Nicholson of London Business School says that the matrix structure is:
“one of the most difficult and least successful organizational forms”.
Others have tried matrix management e.g. DfID and World Bank (both have then rejected it). The new Executive Director whoever that is should have a real look at the matrix management approach and evaluate if it has/is delivering.I would love to be proved wrong on this, because on paper matrix management looks great.
There is work to be done in continuing the clustering of conventions. Learning lessons from the experience of clustering the chemical conventions and then trying to accelerate the clustering of the biodiversity conventions. Then perhaps presenting to the "2015 Special Session on future Development Goals" a request to do the same for climate related conventions and oceans and seas, not all of which UNEP has a management role in…yet.
The new Executive Director I also believe should continue to strengthen the science base of UNEP. The introduction of a UNEP Chief Scientist was one of the important decisions taken under the present ED. The strengthening  and increased funding of the Department of Early Warning and Assessment and its great products: including my favorite, the Global Environmental Outlook Report is needed. Often the products are great but the funding for outreach of them to key policy makers is not. I say this having had the pleasure of helping when I was Executive Director of Stakeholder Forum launching the GEO2,3 and 4. In all cases there was very little money to take the product to the people who needed to see it.
Finally the new Executive Director needs to strengthen the relationship that stakeholders have with the new governing body of UNEP. This is a current conversation, but will continue under the new ED. Stakeholders should play a significant role in both helping policy emerge and in implementing it. If we look over the last twenty years: governments first recognized in 1992 at the Earth Summit, with the nine chapters on Major Groups, that better informed decisions are taken if they involve stakeholders. At the World Summit on Sustainable Development in 2002 they recognized that those decisions would be best implemented, in many cases, with  a partnership with other stakeholders. At Rio+20 they recognized that joint agenda setting was a better way of looking at the challenges that face us.
Back to the main reason for this blog, which is to look at some of the potential candidates for Executive Director of UNEP. But first let’s remind ourselves who has been Executive Director since its creation in 1973. Former Executive Directors of the United Nations Environment Programme have been:
Achim Steiner: Germany (2006-2014)
Klaus Toepfer: Germany (1998-2006)
Elizabeth Dowdeswell:  Canada (1992-1998)
Mostafa Tolba: Egypt (1975-1992)
Maurice Strong: Canada (1973-1975)
I believe that UNEP’s next Executive Director should come from a developing country. I had supported Shafqat Kakahel in 2006, as I believed he had the experience, having chaired Habitat II,  Chaired the Committee of Permanent Representatives in Nairobi (which oversees UNEPs work) and of course being UNEP Deputy Executive Director and then acting Executive Director after Dr. Toepfer left. So here are my humble suggestions of people I admire and who I think could be – should be considered for the next Executive Director of UNEP:

Martinus van Schalkwyk,(SouthAfrica): is Minister for Tourism and former Minister for Environment and Tourism (DEAT), he played a critical role while at DEAT in re-energizing the upgrading of UNEP and in supporting a Rio+20 Conference. He was a candidate for the head of UNFCCC. While at the Department of Tourism he has led the greening of the World Tourism Organization and the promotion of tourism as a means to address poverty eradication.

Kamal Nath (India): is Urban Development Minister. In 1992 at the Earth Summit, which he attended as India’s Environment Minister, he challenged the possibility of a Forest Convention on the basis that if the forest should be used for the a global commons what about oil. He returned to be Trade Minister when Congress won the election in 2004 and then on to become Minister of Road Transport and Highways. He has served in Congress government as a Minister since  1991.

Adnan Z. Amin (Kenya): is Director General of the International Renewable Energy Agency. Adnan served as Head of the UN System Chief Executives Board for Coordination (CEB) Secretariat. In this function, he was responsible for overseeing the Secretariat supporting the CEB in its UN system-wide policy coordination under the Chairmanship of the UN Secretary-General and comprising the Executive Heads of UN System organisations. The CEB is the highest level interagency coordinator framework in the UN system and oversees UN coordination on Policy, Management and Field Operations. Executive Director of the Secretariat of the Secretary-General’s High Level Panel, co-chaired by the Prime Ministers of Mozambique, Norway and Pakistan, on UN System-wide Coherence. e Director of the New York Office of United Nations Environment Programme (UNEP) and Special Representative of the UNEP Executive Director.

Elizabeth Thompson (Barbados): Most recently Assistant Secretary General for Rio+20 as one of the two Executive Co-ordinates. She was also a candidate for the head of UNFCCC. Prior to joining the UN she was Minister of Energy in Barbados and also served as Minister for Physical Development and Minister for Health. 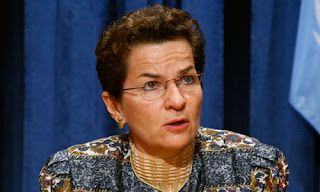 Christiana Figueres (Costa Rica): is the Executive Secretary for the United Nations Framework Convention on Climate Change and is thought to have helped rebuild trust in the organization after the Copenhagen COP. She was the chief negotiator for Costa Rica in the UNFCCC negotiations.
José María Figueres (Costa Rica): is the former President of Costa Rica and first CEO of the World Economic Forum, chairman of LEAD as well as FUNDES Internacional. He has also served as a director of the, World Wildlife Fund, the Botanic Research Institute Texas, the World Resources Institute (WRI), and the Stockholm Environment Institute. In 2010, Figueres joined the Carbon War Room as its first Chairman. (Brother of Christiana)

Luiz Alberto Figueiredo: (Brazil): is probably not a candidate, as he has just been appointed as Brazil's Foreign Minister. He was Director-General in the Ministry’s Department of Environment and Special Affairs, From June to August 2013 he hold the Permanent Representative of Brazil to the United Nations and previously headed its Environmental Policy and Sustainable Development Divisions and was heading the Brazilian team for Rio+20 successful getting agreement in 3 days on a text that had failed to be agreed over two years.

Dr Hesphina Rukato (Zimbabwe): is former Deputy Chief Executive Officer of NEPAD Secretariat from 2005-2009 and before that NEPAD Adviser, Environment and Tourism from 2002-2005. She was also Director for the World Summit on Sustainable Development (WSSD) for the South African Department of Environmental Affairs and Tourism. She  is founding Director of the Centre for African Development Solutions (CADS), a non-Governmental organisation working on sustainable development in Africa.
Other people who might be worth keeping an eye on if the post doesn’t go to a developing country are: Kevin Rudd (Australian Prime Minister who may be looking for a job), Jens Stoltenberg (Norwegian Prime Minister also may be about to lose an election), David Miliband (former UK Foreign Secretary and Environment Minister), Yvo de Boer (Dutch former head of UNFCCC), Andris Piebalgs (Latvia present EU Development Commissioner) Simon Upton (former chair of UNCSD, NZ Minister and now at OECD), John Scanlon (Secretary General of CITES), ARchel Kyte (Vice President Sustainable Development World Bank) and Eric Falt (French ASG at UNESCO).